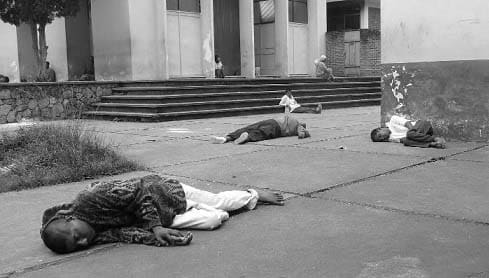 Hospital Nacional de Saúde Mental Carlos Federico Mora, located in Guatemala.
It was founded from the merger with the Neuropsychiatric Hospital in 1983, becoming a single reference hospital for psychiatric treatment.

The hospital is a large one, with more than 900 beds for inpatients and sectors for psychiatric rehabilitation.

The Mental Health Hospital is a national reference hospital center where patients with mental illness are treated and rehabilitated, looking their reinsertion into Guatemalan society, through the principles of humane care, quality, community participation. With transparency and productivity articulated through the National Strategic Mental Health Plan.

According to Guatemala’s Ministry of Health.

But how not everything is as it seems, in December 2014, the BBC made a denunciation accusing the hospital of committing heavy crimes towards patients.

Walking into one of the wards is like entering a hell on Earth. We find more patients in rags sitting on the floor and in plastic chairs, rocking themselves for comfort.

Describes one of the journalists who participated.

Federico Mora Hospital had about 340 patients at the time, including 50 violent criminals with mental problems. But according to the hospital’s director, Romeo Minera, only a minority have serious problems – an impressive 74% arrived needing only a little attention and care and should have stayed in the community.

At the time of the complaint, the journalists posed as a charity team that had the goal of raising funds for the charity. According to Minera “journalists were not welcome”. The disguise was the only way to bring the atrocities to light.

One nurse says that two or three professionals are responsible for 60 to 70 patients. Others say that the only way to deal with them is to sedate them.

Patients come to us, desperate for human contact. A man grabs me and begs me to be taken from the hospital.

While my translator distracts the director, I walk through the rooms located in a long, dark corridor. Here, there are more patients lying on broken and rusty metal beds.

They seem too sedated to walk to the bathroom. There are puddles of urine on the mattresses, and the clothes of some of the patients are covered in their own feces. The stench dominates the room – and I try with all my might to control my nausea.

Reports taken in full from the BBC story in 2014.

In response to the BBC investigation, the Guatemalan government said the hospital “uses the lowest dose of sedatives as recommended by the World Health Organization” and defended the hospital’s conditions.

“There are nurses trained to meet the needs of the patients, including keeping them clean and clothed, and a maintenance crew to keep the environment clean.”

During the secret filming, the director makes a surprising confession – the guards sexually abuse the patients. The hospital, he says, is a place “where anything can happen.”

Two former patients tell of being raped at the Federico Mora. They claim that the acts came from the medical staff as well as the guards.

A patient says she was sexually abused by a nurse while she slept. She was only 17 years old and a virgin.

I was not aware of this because I was sedated. I didn’t realize that I had lost my virginity until the next day. I was bleeding from my legs, so I found out that what had happened that night was that a male nurse had come in and raped me.

The young woman says in an interview.

This was her third day in the hospital. After two weeks, her cries for help caused her family to remove her from the hospital. “You never forget an experience like this,” she says, tearfully.

Ricardo, another former patient, says he was raped during the three years he spent at Federico Mora. He was only released after a court battle, claiming he was misdiagnosed with schizophrenia.

They took advantage of the female patients when they were sedated. The police officers, the patients and the nurses – and some doctors, too. They would separate the prettiest girls for themselves during the night.

Ricardo says in an interview.

In a report published in 2012, the group described the hospital as “the most dangerous place our investigators have ever seen anywhere in the Americas.”DRI said that “any person with or without a recognized disability in this hospital faces immediate risk to life, health, and personal integrity, as well as risk of inhuman and degrading treatment or torture.

The report explains that patients were denied medical care, were exposed to serious and contagious diseases and infections, and, aggravated by “widespread” sexual abuse, were at risk of contracting HIV.

On one visit, the group was able to film a patient explaining that she had been sexually abused on her first day in the hospital while tied to a wall. “I also saw patients kept in isolation. There was a man literally trying to climb his way out of an isolation cell. He was on top of the wall trying desperately to get out. And people are held in these cells for hours or days,” said DRI founder Eric Rosenthal, who described the place as the “most terrible” he had ever visited.

On my visit to the hospital, I saw one of the isolation rooms used for patients who were too violent to be restrained.

It is a very small room with a small window. A man was cowering in the corner. The floor was covered with human waste.

The director told me that these rooms were monitored, but admitted that recently a patient had committed suicide by climbing up to the window and hanging himself.

The Guatemalan government defended the use of these cells, saying that “patients are kept in isolation for only two hours on each occasion” and are constantly monitored.

The government also stated that no one was being held in isolation during our visit.

The use of isolation rooms was part of the evidence taken by DRI to the Inter-American Commission on Human Rights (IACHR) in 2012, which issued an “emergency measure” – effectively compelling the government to resolve the issues raised by DRI to “save lives.”

The hospital staff fears reprisals if they talk to the press, but six employees have agreed to speak on the condition that they be interviewed together and not be identified.

“We don’t have the drugs we need to treat patients. It’s dirty, there are rats and cockroaches.”

“I think I speak for everyone by saying that the abuses committed in the hospital by guards are common knowledge.”

“It’s not only dangerous for patients, but for us as well. We’ve complained, but no one listens. Working in the hospital is horrible.”

Excerpts from the interview with employees

The Guatemalan government told the BBC that it has begun the process of improving the mental medical system across the country and is building a wall to separate prisoners from the rest of the patients.

He also stated that, although he had not received any reports of sexual abuse, he ordered an internal investigation.

There is no new information about the investigation, and the question remains whether something has really changed. After the BBC story it seems that the government wanted to stifle the situation. On the official website of the Guatemalan Ministry of Health, it is possible to find superficial details about the establishment and very few images that depict only the outside world.

1 thought on “Federico Mora: The Worst Psychiatric Hospital in the World”