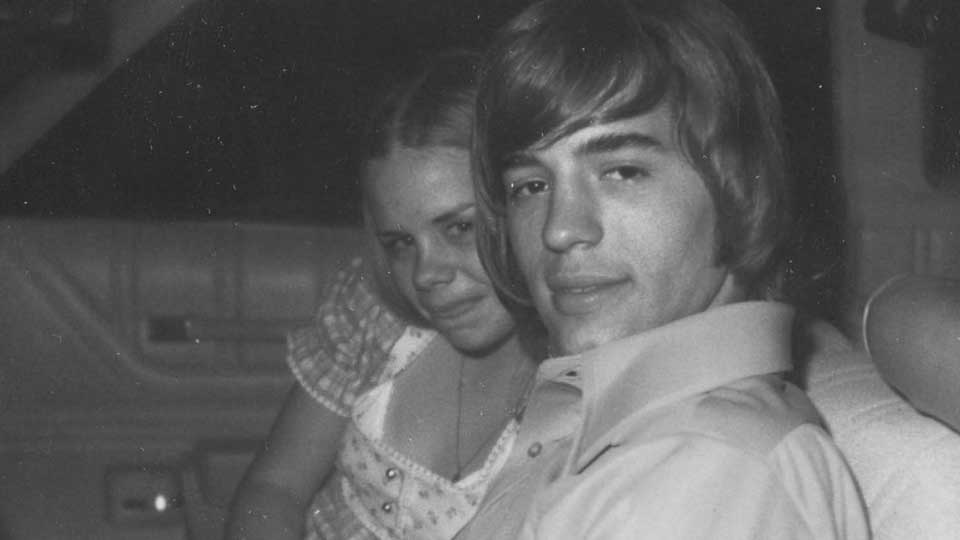 Born on January 31, 1957, in Texas. Carla Jan Walker had three male brothers and three female sisters. The family lived in Fort Worth, Texas.

During her teens Carla Walker was a Cheerleader, while her boyfriend, Rodney Roy McCoy, was a quarterback on the school’s American soccer team. The two had a great relationship, never fought and were always together.

On February 17, 1974, Carla was 17 years old. In the company of her boyfriend, the girl had just left a Valentine’s Day dance at Western Hills High School where they studied.

She wore a blue party dress, the couple had dined at a seafood restaurant and then spent time with another couple of friends before heading to a bowling alley, where they went to use the bathroom.

Then they headed to a parking lot in the area, well known for gathering young people for fun. According to Rodney, the two stayed in the car, talking and drinking a little.

The two were talking and dating in the car, Carla was sitting with her back to the door. Without either of them realizing it a man opened the car door, by surprise and with such force that Carla fell backwards and was held by the assailant.

The couple did not recognize the man, he was armed with a pistol and began giving orders, threatening Rodney and quickly began assaulting him with repeated blows to the head until the girl’s boyfriend came to pass out.

Rodney recounts that Carla begged the man to stop attacking Rodney, and that he would agree to do whatever he wanted as long as he left her boyfriend alive. Because of these flashbacks the boy believes he was struck many times, and recalls that the man pointed the gun at his head and even pulled the trigger, but the gun did not fire.

The boy wakes up completely bruised, his clothes soaked with blood. He looks for Carla, can’t find her, and begins to walk around the parking lot in his search.

The only thing Rodney finds is Carla’s purse. He then drives desperately to the home of the victim’s parents.

Aflito knocks on the door, shouting and saying “they took her, they took her…”, Carla’s older sister, 18-year-old Cintia opens the door and finds the young man in shock, bruised and completely out of control.

Rodney tells his family what has happened. Promptly Carla’s mother calls the emergency room requesting an ambulance for the boy while the father gets into his car and drives to the parking lot. The police are called at this point.

The police hear Rodney’s statement, he tells police that the kidnapper was a young man about 20 years old, with short, wavy hair, a Texas accent and wearing a bright green sleeveless vest and a white cowboy hat.

Immediately the search begins. Searches have been made on foot, by car, on horseback, and even with the use of a helicopter.

Carla was searched everywhere possible. For the first 48 hours nothing was found, not even a clue or a phone call. The family was at a loss.

72h after the crime, in an open drainage ditch in a street near Lake Benbrook, about 18mi (30 km) from where Carla was, her body was found. Partially clothed, her clothes had been torn, and her parents were able to identify the body by the jewelry scattered at the scene before they even saw the body.

Similarity to the Becky Martin case

An investigator named Din Mitter, found similarities between the two cases. According to him, they had similar characteristics, they were blonde, small, thin and very pretty. Becky’s murder had occurred a year earlier, in 1973 at a college in South Texas.

Becky Martin’s remains were found in the same area as Carla’s body. No clue or suspect was ever found, and for quite some time the police thought it was the work of a Serial Killer.

According to coroners, Carla had been tortured and raped for 3 days, with the cause of death as strangulation. Toxicology tests revealed that she had received several injections of morphine, a strong sedative that is restricted and controlled to purchase.

The police were intrigued, they began to wonder how the killer had access to this medication. The investigation started from this point, it was an important clue, but one that unfortunately led to nothing.

One of Roy’s great pains, was that the couple always used to lock the car doors. But on that particular day the boy was using his mother’s car, which presented greater difficulty in functioning in locking.

Carla thought she had locked it, but by the time the kidnapper forces the door the lock gives way and they realize they hadn’t lowered the pin far enough.

He says he feels guilty, he thinks every day that he should have checked the lock and maybe it wouldn’t have happened, they would have had a longer reaction time.

More than 200 calls with tips and information were received by the police. A reward was established for anyone giving any relevant information.

One of the first suspects raised was treated as a“person of interest”, meaning there was no evidence or proof of involvement in the case but for some reason the police radar needed to be on the lookout.

Glen Samuel Mccurley was 31 years old at the time. He had police priors for car theft. State records show that he stayed in prison for a short time, earning parole in April 1961.

At the time Glen had just gotten out of prison, he lived about a mile from where Carla was kidnapped. He had recently purchased a gun, a .22 caliber Ranger, and it was stolen about the time of the case.

When asked why he did not report the robbery, Glen told police he was afraid because he was an ex-convict.

The suspect also said that after leaving bars he led a quiet life with his family, was married and had two children, worked and went out fishing as a hobby. He claimed that on the day of the crime he was home, but that his wife could not confirm his alibi since she was traveling to visit relatives.

On the day of the kidnapping Glen worked until 4:30 p.m. as a truck driver, and the following days he had picked up extended time off.

He denied any connection to the case, said he did not know the victim and the police, in turn, had no consistent evidence.

The investigation focused on other suspects, but nothing consistent was raised. And the case remained stalled for the next few years.

The letter writer was anonymous, pointed to a name and said this was the killer. Police believed that by publicizing the letter received in 1974 someone might recognize the writing and new information would move the case along.

It remains unclear why the letter was not released until so many years later, since it seemed to be the biggest piece of evidence in the case. The police never answered that question.

Carla’s family never gave up hope for justice; the brothers were very active in investigations.

DNA of the killer is found

In 2020, DNA samples, were taken from Carla’s clothing and sent to a modern private laboratory.

First technology was used in the complete identification of the criminal’s genetic profile.

The sample, after much analysis, resulted in three possible McCurley brothers. Glen Samuel Mccurley returns to the case, this time with strong evidence thanks to technology.

On July 7, 2020, investigators collected trash from Glen’s home and took it to the lab. Saliva samples were taken from discarded cups and bottles, and on September 4 the expert report showed that one of the samples corresponded with male DNA taken from Carla’s clothes.

Six days later, on September 10 of that same year, police officers visited McCurley and were invited inside. The man maintained the same version as in 1974, and reaffirmed his innocence. Glen agrees to give the police a DNA sample and even signed a consent form.

And once again the DNA matched, this time with a sample taken from Carla Walker’s bra.

Justice for Carla, Glen is arrested

At the age of 78, on September 22, 2020, Glen Samuel McCurley was arrested in connection with the murder of Carla Jan Walker. He was arrested and charged with manslaughter on $100,000 bail.

Detectives believe that the crime was random, victim and killer did not know each other. For the past 40 years McCurley has led a normal life and is not suspected of any other crimes.

One of Carla’s brothers gave a press conference after the arrest, emotional, and said that many times he thought his sister would never receive justice, but that today he felt relieved and thanked the police for their work.

In all, it was 46 years, 5 months and 3 days before the killer was arrested.

Glen’s wife has not been identified, but said she was shocked and never imagined her husband was capable of such an atrocity.

Glen was sentenced to life in prison without the possibility of parole. Carla’s family was pleased with the sentence.

There is a podcast in English that tells Carla’s case, rich in detail. It is worth accessing, and much of my research was taken from there.