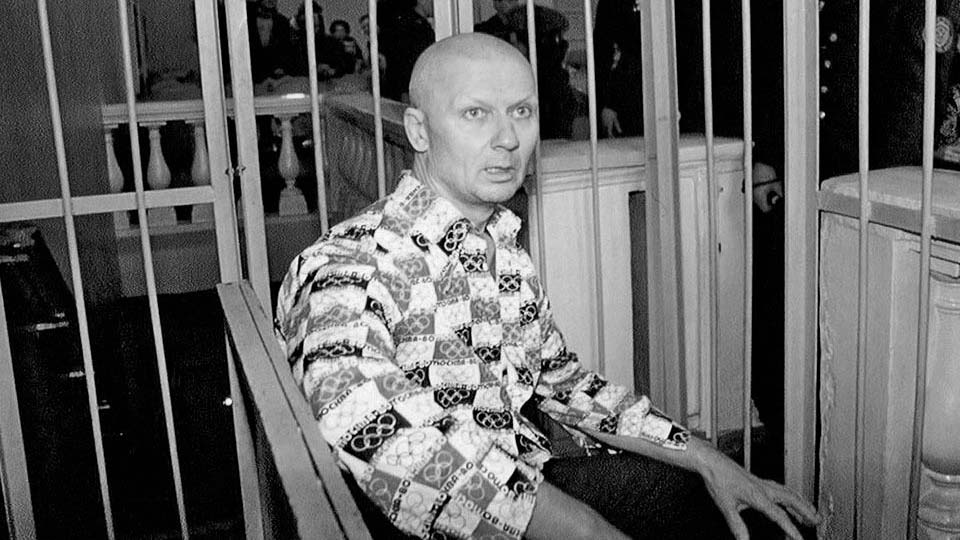 The crimes committed by Andrei Romanovich Chikatilo are the most disturbing among serial killings. Extremely cruel, he raped, murdered, butchered, and even ate some of the pieces of his 53 victims.

Of Ukrainian origin, his crimes took place between 1978 and 1990, and had only children and women as victims.

Born in the village of Yabluchnoye in the former Soviet Union, Andrei Chikatilo lived with misery and hunger. World War II and the agrarian policies of the time devastated many families, and Andrei’s mother, Anna, told him that her brother was eaten by his neighbors in an act of cannibalism, due to the over-starvation of the population.

His father Roman, a Soviet soldier, was arrested during World War II, leaving the task of raising the children solely to Anna – a fact never well accepted by Andrei.

It is not known if the story about his brother was true or just a delusion of his mother, records of Stepan’s birth were never found, and years later his mother went into a severe case of dementia. At school, although a very good student, he was shy and had difficulty making friends.

Andrei was constantly bullied by his classmates because he had urinary incontinence; he suffered humiliation in public and even physical aggression.

As a teenager, he discovered a condition of erectile dysfunction that came to complete his low self-esteem that he had carried since childhood. This caused him to focus too much on his studies, while his classmates were getting their first girlfriends.

Andrei even confessed that he tried to have sex with girls from his school at the time, but all attempts were unsuccessful due to erectile dysfunction.

Becomes a teacher and a member of the Communist Party

In early adulthood he married and had two children. According to rumors his wife became pregnant in an unusual way: Andrei masturbated and then introduced semen into her with a syringe.

As an adult, at the age of 34, Andrei was an elementary school teacher, and this brought him very close to children. He began to develop a dark sexual desire and was even fired from one of the schools, accused of molesting a student.

Unemployed and convinced that he had been fired for being part of the communist party, Andrei and his family moved to Shakhty and bought a house there. The area was surrounded by a forest, where Andrei made his first victim.

His first victim was a 9-year-old girl. Andrei approached her at a bus stop on the side of the highway when he realized she had missed her school bus, offered her a ride, and told her that when they got to her house, he would explain everything to her mother, thus preventing her from being punished for being late.

Andrei took her into the forest with the excuse that his car was parked on the other side of the forest. Then Chikatilo raped her, cut out her tongue and dismembered her body. He didn’t even worry about hiding the corpse, leaving it in the forest.

Working for the Soviet Communist Party

His ideas of communist origin earned him an invitation to a position of trust in the party. From that moment on, Andrei began to travel extensively by train throughout the country, and new murders began to occur throughout the Soviet territory.

Their favorite targets were children and prostitutes, who were captured at bus stops and train stations. They were mutilated, had their eyes pierced, body parts bitten out, and the remains abandoned in the forest.

He would tie his victims with their arms behind their backs and try to rape them, then, after failing because of his erectile dysfunction, stab them repeatedly. In some cases he would disfigure his victims’ genitals and cut out their tongues so that they could not scream.

The cruelty of their crimes was so extreme that many people thought that the deaths had been caused by large animals that lived in the forest.

The situation began to become untenable and the victims’ families were desperate for answers. However, the Communist Party refused to admit that there was a serial killer committing the crimes, since at that time, at the height of the Cold War, the Soviet Union covered up any events that could demoralize the country’s image.

However, in the face of popular pressure it was necessary to increase efforts, so the police, under Mikhail Fetisov’s leadership, profiled the killer and started collecting sperm from all men who matched, in an attempt to obtain similarity with the genetic material found at the scenes.

But the technology of the time didn’t help much, basically the samples only eliminated a few suspects.

The police deployed undercover officers at train stations and on November 19, 1990, Andrei was seen coming out of a forest with his face and clothes covered in blood.

He told the police that he used to kill animals, however this story did not convince the authorities, but without evidence they were forced to release him.

Everything changed the next day, when another body was found. On November 20, 1990, Andrei Chikatilo was arrested, but he kept denying any charges and taking everything to political issues, where he considered himself just a victim of those who were against communism.

The Rostov police decided to request help from psychiatrist Alexander Bukhanovsky to get a confession from Chikatilo. By Soviet law at the time, they had ten days for the accused to admit to the crime. By the ninth day, no breakthrough. That’s when Bukhanovsky stepped in and Andrei confessed.

“I explained to him that I was not his enemy, nor a lawyer. In medical language, I knew the difference between guilty and wrong.”

Bukhanovsky to the “Biography Channel” in 2004.

He confessed how he cruelly murdered 56 people, showing all the savagery of his actions and giving details, all while showing great happiness. The police, however, found only 53 bodies.

His trial took 6 months, and as is common in these cases, for example the stories of Ed Kemper and Aileen Wuornos, the defense tried to plead the defendant’s mental insanity.

But during his statements, he showed himself fully capable of understanding the cruelty of his actions, and the way he talked about the crimes showed how much pleasure he took in committing them.

Due to the anger of the victims’ relatives, he remained inside a cage with iron bars during his testimony. At one point, the criminal even pulled down his pants and showed his genitals to the audience.

The judge didn’t accept the claim of mental illness, and Andrei was sentenced to death in 1994. On February 15 of the same year, he was taken to a private cell in Rostov prison and killed with a single shot behind his right ear.

Butcher of Rostov a.k.a. Rostov Ripper

One of Andrei Chikatilo’s nicknames is Butcher of Rostov. Rostov was the city where he committed most of his crimes.

The error occurred after a mistaken analysis by the police. Investigators thought that one of the victims had been crushed by a farm machine. In fact, she was killed by Chikatilo and had her body completely mutilated by the criminal.

Curiosities about the case

Most of the time, after the crime, Chikatilo would feed on the genitals of his victims. In addition, he used to rip his victims’ tongues out with his teeth to make it impossible for them to scream for help.

At his trial, Chikatilo defined himself as a “miscarriage of nature,” “a mad beast,” to which “the only thing left was the death penalty, which would be even too little for him,” in his own words.

“I want my brain to be taken apart piece by piece, and examined, so that there are no others like me.

As a way of commemorating the 300th anniversary of the local police, the city of Rostov displays the belongings of the “butcher” in one of its museums.

A cinematographic work was made based on the story of Andrei Chikatilo. The film “Evilenko” has heavy scenes of sexual violence and cannibalism, but if you are curious it is worth watching.