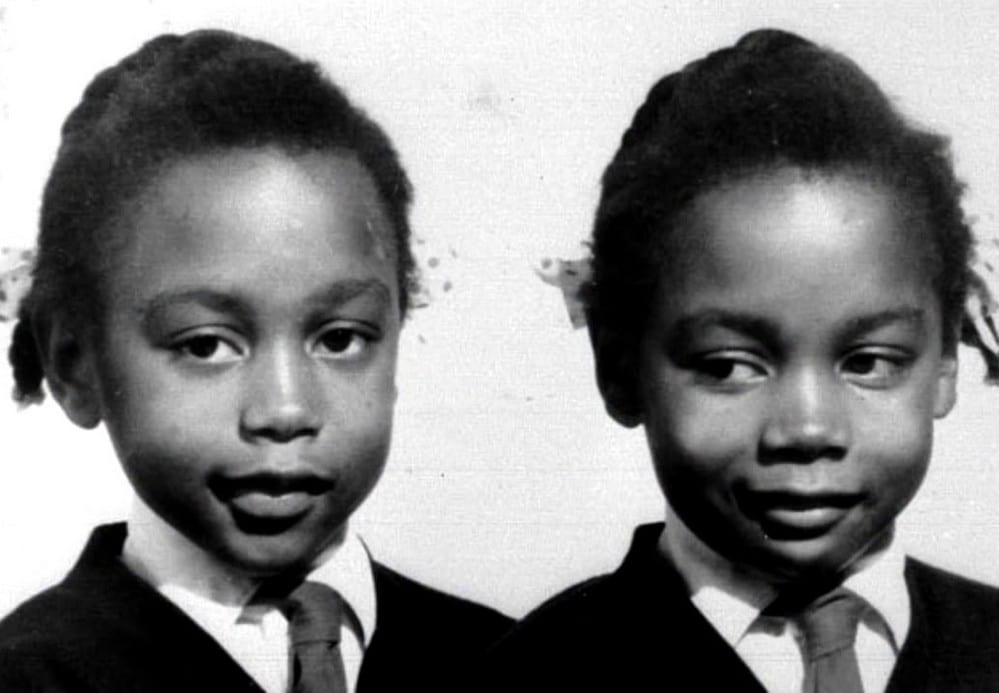 June and Jennifer Gibbons were born on April 11, 1963, in Barbados, Caribbean. The father worked for the British Air Force, and after the birth of the twins was transferred to Wales. The family moved to a house in the county of  Pembrokeshire, Haverfordwest.

The family attracted a lot of attention from the neighbors, there had never been a black family in the region.

Connection between the twins

The girls only played with each other, had their own language and showed no interest in playing with other children. At the age of three, they barely made short sentences or spoke to adults, but their parents didn’t care as they looked healthy and happy.

When the twins went to school at age five, they were described as extremely shy and at least eccentric in behavior.

The sisters seemed to strive to look like the same person, combining movements and behaviors. Their language became increasingly fast and fluid for both, making it impossible for adults to decipher. Only Rose, the little sister of the twins, could infiltrate this world apart.

Reports Cathy Arthur, a school therapist at the time who was fascinated by their behavior.

An interesting fact is that despite the behavior outside the curve, the girls did not suffer any kind of bullying or discrimination by their schoolmates at the time. They were well accepted in the school community and even loved for their extravagances by their peers.

As mentioned earlier, girls were the only black children in the region. Adding this to the strange behavior of the sisters, the offenses became frequent and violent.

The girls were referred several times to therapy, which did not have much effect, they continued to live confined in their own world.

On their 14th birthday, the Gibbon family decides to send the girls to boarding school, where they would be separated. But the results were terrible, the two went into deep depression, had no relationship with anyone and did not want to eat. It was as if one could not live without the other.

It was necessary to put them back together. This ended up further strengthening the bonds between the two. Their families said that the girls lived in a world of their own, completely isolating themselves from reality.

At Christmas 1979, the girls got a diary as a gift and from then on started writing some stories. Initially, the texts seemed innocent, recounting novels set in warm California.

However, the characters had some curious traits with criminal tendencies. For example, one of Jennifer’s books tells the story of a doctor who needed to save the life of a son who had a history of heart disease.

To perform such a procedure, the doctor killed his dog and transplanted the animal’s heart into his son. In addition, the soul of the dog that now inhabited the boy, would seek revenge on the doctor who committed his murder.

Crime gets in the twins’ way

The two began committing petty crimes, holding up convenience stores and pedestrians walking down the street. They committed aggressions and even an arson was part of their police files.

So they were admitted to a maximum security psychiatric hospital called Broadmoor. There, the sisters lived in prison for over a decade, remaining completely silent.

“Youth offenders get two years in prison […] We’ve had 12 years of hell because we didn’t talk […] We’ve lost hope, really. I wrote a letter to  Queen Elizabeth II, asking her to get us out of there. But we got stuck.”,

By the time they were in the hospital, Jennifer’s health had deteriorated. The girl developed a neurological disorder that resulted in repetitive and involuntary movements. This caused the sisters to lose interest in writing.

When the two were 30 years old, they decided by mutual agreement that one should die, and shortly thereafter, in March 1993, when they were transferred from one prison to another, Jennifer suddenly fell ill and died. The reason for his sudden death is still a mystery, the reports showed an acute myocarditis in the heart, which had no explanation.

After Jennifer’s death, apparently, June was really free. Currently, aged 57, the woman normally lives without the help of psychiatrists and visits her sister’s grave once a week. The story of June and Jennifer Gibbons is a subject of curiosity and study to this day.

Trivia about the twins

They lost their virginity a week apart – with the same boy. This was after they left school and locked themselves in their room for two years. The fact occurred at the time they started drinking and smoking a lot.

They wrote fiction stories, and although it seems contradictory because of the lifestyle they led – communicating only with each other – they dreamed of becoming famous thanks to their stories. They had notebooks and notebooks full of stories and poems – and even some more developed novels.

Not unlike most criminals and antisocials, June and Jennifer had an I.I. very high. The exact number has not been published, but while they were confined to Breadmoor Hospital, they did an I.Q. and both scored well above average.

Inside the Breadmoor hospital, they were trapped in the same pavilion – but each at one end of it. The way they split at school, they were catatonic. Hospital doctors described them as “deeply disturbed.” Oddly enough, one ate for a day or two while the other ate nothing, and then alternated with each other.

Yes, they had a strong love-hate relationship. While they loved each other, they hated each other deeply. Envy was the main reason for this laugh: Jennifer was 10 minutes younger but saw June as smarter, prettier and funnier. Once, June tried to strangle Jennifer with a cable, and another time she tried to throw Jennifer into a river. But in the end, they always forgot these “details” and moved on.

When they were 14, they squeezed their breasts with a cloth to try to keep them from growing. Although painful, they did. This is extremely abnormal and potentially dangerous to a woman’s body.

The story will become a movie

Actress Letitia Wright will star in the film adaptation of the scary true story of twin sisters June and Jennifer Gibbons. Now 26, Wright became famous for her work as a performer for Shuri, sister of the hero Black Panther in the Marvel Cinematic Universe films.

In addition to Letitia Wright, the film will also feature in its cast with actress Tamara Lawrance. According to the international press, although the film has no scheduled release date yet, filming of the production is expected to begin in the near future.